In 1931, a bakery clerk began to hold evangelistic meetings in the streets of his home town of Belfast, Ireland. The next year he set off on a lifelong journey that would take him around the world to stadiums and tiny churches and academic lecture halls. It was a ministry and vocation which included rigorous historical scholarship into deep spiritual mysteries and enthusiastic preaching to crowds of seekers.

J. Edwin Orr speaking to a group of university students in India, 1956.

Collection 355: Papers of J. Edwin Orr, not only tell Orr’s life story, but also documents Protestant evangelicalism around the world in every continent except Antarctica. This June, the Wheaton College Billy Graham Center Archives is pleased to announce that this greatly expanded collection can now be used by Christian workers, scholars, and the general public. 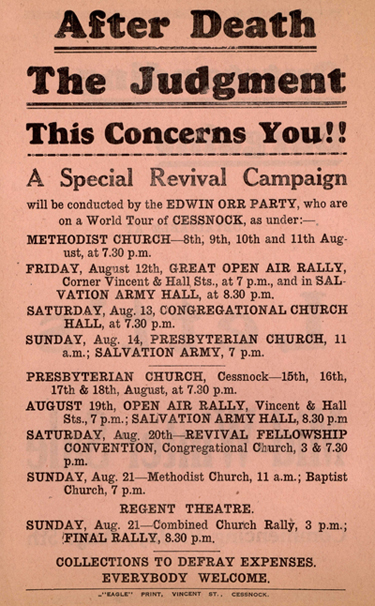 Handbill for a series of Orr’s evangelistic meetings in Australia in August 1949.

James Edwin Orr (1912-1987) was born and grew up in Belfast. Before he reached his twentieth birthday, he had received a call to preach the Gospel. He began in Belfast, then moved to England, went on to Europe, and by 1942 had preached extensively on six continents, as well as writing more than a dozen books. After serving as a United States Air Force chaplain during World War II and earning a doctorate in history from Oxford University, he settled in the United States. Besides continuing to preach both evangelistically and on the deeper Christian life, he was an associate and advisor to numerous other evangelical leaders, such as Billy Graham, Bill Bright, Henrietta Mears, Andrew Gih, and Oswald Smith. He also taught for decades at Fuller Theological Seminary School of World Mission and published many books on the history of revivals in the nineteenth and twentieth centuries. He died in 1987 while preaching at a Keswick conference in North Carolina.

Draft of a schedule for one of the seminars on revival history Orr lead at Oxford University every year from 1974 through 1973.  He invited scholars, evangelists, leaders of denominations and nondenominational ministries, hoping that it help prepare the church for spiritual awakening.

Since 1987, the Archives has held a small collection of Orr papers, one box of correspondence from his evangelistic meetings in Latin America, particularly documenting his influential Brazil campaign in 1952. Since Orr’s death in 1987, however, family members have continued to generously donate his files to the Archives. 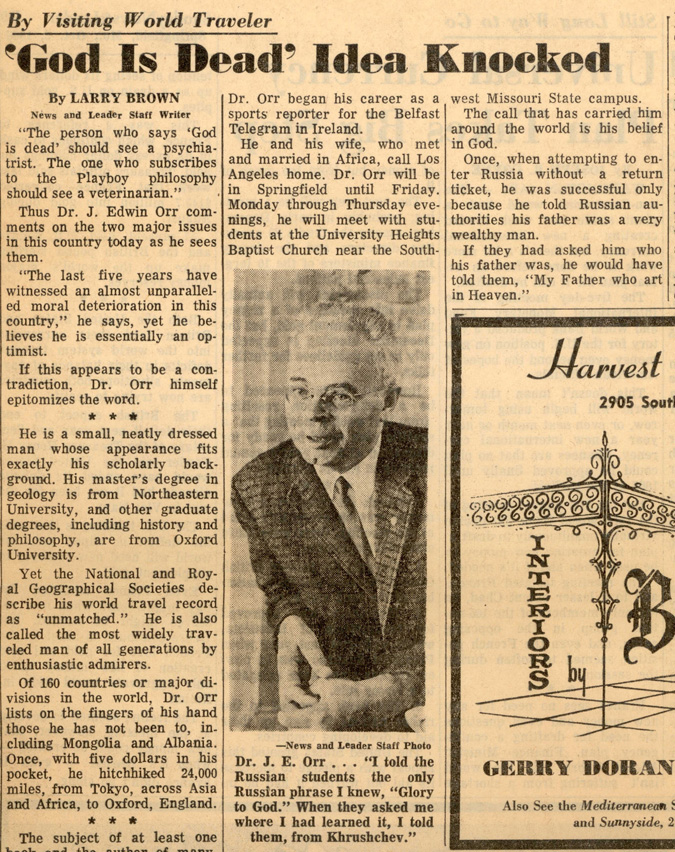 Newspaper clipping from a Springfield, MO describing one of Orr’s speaking engagements to college students. Undated.

These additional materials have just been processed, described, and added to the existing collection, enlarging the Orr Papers from the one original box to 57 boxes. Inside these boxes and folders, researchers will find not only records of Orr’s own ministry, but his extensive correspondence with pastors, evangelists, scholars, and denominational and parachurch ministry leaders,  a virtual Who’s Who of American Evangelicalism spanning the 1930s through the 1980s. 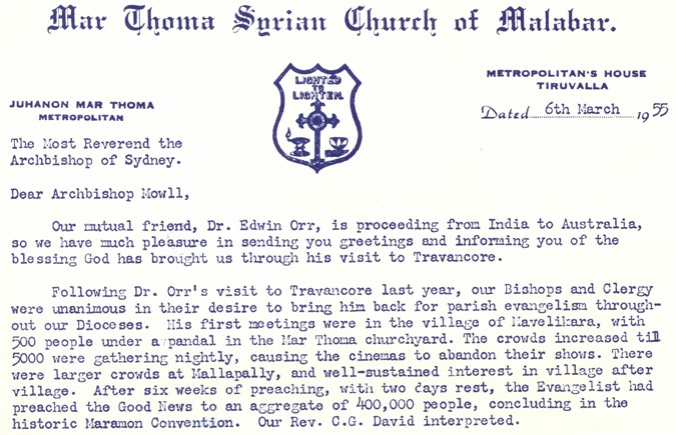 Besides Orr’s personal papers, the collection contains numerous reports on the spiritual condition of particular cities, countries and regions areas over many decades. Spiritual renewal was a particular concern of Orr’s—a reaction to what he perceived as growing moral laxity stemming from secularization—and his papers reflect his interest in the history of revivals. Collection 355 holds a number of materials documenting spontaneous revivals and spiritual renewals in dozens of countries, including, Australia, Brazil, Canada, East Africa, Indonesia, India, Japan, Korea, Melanesia, Norway, Papua New Guinea, the United States, Wales, and West Africa.

In addition to Orr’s papers in Collection 355, materials by and about J. Edwin Orr are also scattered throughout the Archives’ collections, including correspondence in Collection 111: Papers of Charles H. Troutman and Collection 285: Papers of Torrey Maynard Johnson, among many others.