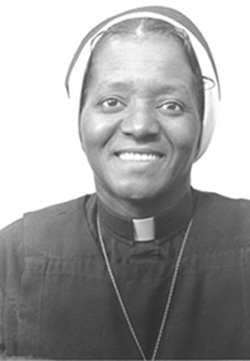 This February, in celebration of African-American History Month, the Wheaton College Billy Graham Center Archives commemorates the life and spiritual legacy of Rev. Consuella York (1923-1995), the “Jail Preacher,” and showcases a few items from her personal papers.

Affectionately known as “Mother York,” she ministered in the Cook County correctional system for over 43 years, bringing the Christian message of love and redemption to inmates and correctional officers alike.

Born and raised in Chicago, Consuella York demonstrated an early aptitude for preaching, inherited from her Baptist preacher father. In her 1988 oral history interviews held in the Archives, York recalls winning a prize for oratory in 1948 and shortly afterward entered the Chicago Baptist Institute, where she studied advanced homiletics and pastoral theology, despite the fact that her church denomination did not ordain women as clergy members or allow them to preach. In the same oral history interview, York describes the day 1952 that changed the direction of her life:

I shan’t forget the day the Lord called me to preach. It was in 1952, the fourth Monday in February, and I had a mimeograph shop at 3422 South State Street. It was at high noon, and I was running my mimeograph machine, and very audibly, I heard a voice say, “Preach my gospel and give me a clean life.” I mean audibly, not any muffled sound, nothing. I wasn’t in a trance. I was at my mimeograph machine. I cut my machine off and ran….to the back of the place where my godmother was (her name was Mother Betsy Brooks). I said, “Mother, Mother Brooks, the Lord has called me to preach, called me to preach!” And she was washing dishes. She just dropped the dishes. We were back there shouting…. and he [her father] came by the shop. I said, “Daddy, the Lord’s called me to preach.” He said, “Daughter, Daughter, Daughter, be analytical. Be analytical!” [CN 397, Tape 1].

In her interviews, York describes the many challenges facing gifted women who discerned a call to public Christian ministry in the 1950s. But her determination to follow her calling never wavered, despite stiff opposition, and she also received encouragement and support from surprising sources:

I’m in a Baptist school, Chicago Baptist Institute, at 3820 South Michigan now in the third year of school, one year before graduation in a Baptist school that does not condone or agree with women as ministers. And here it is, that night, I went up to the school, and I had not planned to tell the secretary what had happened. But I was up in the Deans office. I said, “Dean Mitchell, what do you think about women preachers.” He said, “Consuella, now you know we don’t license or ordain women.” He said, “But don’t you allow me or anybody else to dictate to you what the Lord told you to do for you must give an account to the Lord for yourself.” I said, “Thank you so much” [CN 397, Tape 1].

York went on to graduate from the Chicago Baptist Institute in June 1953 and was ordained a year later by Rev. Clay Evans, a former classmate, fellow pastor, and lifelong friend [See Box 1 for her diploma and ordination certificate]. York remembers, “Reverend Evans has not ordained or licensed another woman. He said, “I did that because the Lord told me to do it.'” 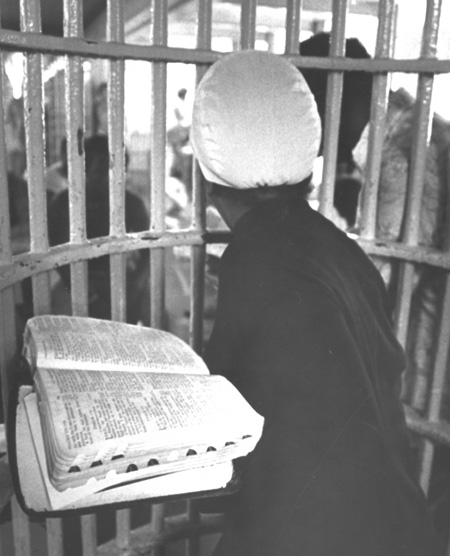 Consuella York and her well-used Bible at Cook County Jail, 1977.

In 1954, however, the ministry that would define her as “Mother York” to thousands incarcerated in the Cook County correctional system was already underway.

In a biographical manuscript held in the Archives [CN 397, Folder 1-3], Rev. York describes her first visit to Cook County Jail in February 1952, an experience that cemented her lifelong commitment to reaching incarcerated men and women with the hope of the Christian gospel:

I went strictly for observational purposes. For I thought as others feel now that those folks ought to be there…. I went there with that feeling. I went to observe and I had no plans at all for doing a jail ministry….. So that Sunday morning on my knees I looked between the bars with my eyes wide open and very vividly the Lord said to me, “Suppose one of those boys were your sons. How would you feel?” That struck me between my eyes and I’ve been a jailbird ever since [CN 397, Box 1, Folder 3].

Mother York in Cook County Jail in 1977. Note the basket of Snickers bars she is distributing.

Throughout her four decades of service, Mother York embodied the qualities, calling men and women to repentance, delivering messages of hope and forgiveness, while demonstrating compassion and acceptance. Dressed in somber clerical garb and armed with a fat Bible and ready prayers, York addressed more than just spiritual needs in Cook County’s jails. Her visits also ministered to inmate’s material needs in the form of candy, home-cooked meals, toiletries and sometimes just a listening ear. The many cards, drawings, and personal messages from inmates held in the Archives reveal the deep affection and respect Mother York earned from the incarcerated men and women she befriended.  Her approach to prison service combined high standards for discipline while exuding compassion and recognizing the human dignity of every inmate she encountered. Her philosophy of ministry stemmed from her first visit to Cook County Jail in 1952 when York felt a divine call to reach inmates with God’s message of unconditional love and forgiveness.

The words of the Lord stuck indelibly in my thinking and down through the years it has kept me sharing with love, giving discipline, having a listening ear, and yet being mindful that judgement is in the power of God and mercy and love in the hands of His people and he passes out vengeance, yet he extends mercy because of His love for humanity. Those three premises are the foundation for jail work [CN 397, Box 1, Folder 3].

Hand-drawn sketch of the crucified Christ sent to York from the inmates in A3. From CN 397, Folder 1-1.

To many inmates, York embodied the sacrificial love of Jesus Christ. As one hand-drawn portrait of the suffering Christ suggests [CN 397, Folder 1-1], Mother York chose to spend her life and resources befriending the forgotten and marginalized. Another card of appreciation [CN 397, Folder 1-1] from female inmates (signatures have been removed) illustrates the profound impact of Consuella York’s love and service to those experiencing the “untimely despair” of incarceration.

Another example of the many cards sent to Consuella York. From CN 397, Folder 1-1.

Consuella York’s Christian service was not limited to prison ministry. For forty-one years she pastored Christ Way Missionary Baptist Church in the Woodlawn neighborhood of Chicago and served as an announcer for the weekly radio and television program, What A Fellowship Hour, produced by her former classmate, ordaining minister, and lifelong friend, Reverend Clay Evans. For the last 20 years of her life, Rev. York served as the first female chaplain of an all-male prison. In 1983, she received the Salvation Army’s Chaplain of the Year Award.